Whenever I need to remove a tree or work with tree trunk to turn it into artwork, the first tool I think of is the Chainsaw.

Yes, this power tool can help you to cut down a tree easily, you can also use it to carve wood and make it a beautiful, artistic masterpiece.

You can give any shape to a piece of wood just with the help of a chainsaw.

In my wood carving life, I’ve carved hundreds of trees only with this tool.

In the early stage of my professional life, I was very curious about the evolution of chainsaw! I’ve always wondered about the very first look and use of it.

That’s why I’ve searched on the internet and talked with the experts about the early life and the evolution of modern chainsaw.

If you’re also interested to know about it, this article may help you a bit!

What is a Chainsaw

Chainsaw is usually a portable power tool which has a set of teeth on an endless chain. It is able to quickly cut through tree trunks or branches.

Usually, you need to manually pull hand saws back and forth for cutting wood, but with a chain saw, the cutting power comes from a metal chain which rotates around the saw blade. Almost all chainsaw has a motored powered by gasoline.

Chainsaw is used for cutting down trees, limbing on trees, pruning, slow down or make firebreaks in a wildland fire suppression.

Chainsaws have developed as tools with the combination of specially designed bar & chain to use in a chainsaw art & chainsaw mills. Specialized chain saws are able to cut through the concrete and even it can be used to cut ice to make ice sculpture in Finland at winter swimming.

Construction of a Chainsaw

A chainsaw consists of several parts and they are-

Chainsaw engines generally consists of either two stroke gas powered internal combustion engine or electric motor which is driven by a battery or electric power cord.

The drive mechanism of a chainsaw has centrifugal clutch & sprocket. The clutch protects the user from kickback.

Chainsaws have an extended bar with round end alloy steel. And all guide bars have few common elements for its operation, like- gauge, guide slot, oil holes, grease holes at bar nose.

Cutting chain of a chainsaw have sharp & small cutting teeth. This chain is pretty much similar to a bicycle except the rollers. Each tooth of this chain takes the form of the folded tab of chromium plated steel with sharp curved or angular corner.

In modern chainsaws, manufacturers include a lot of safety features to protect the user. Like- chain brake, chain catcher, rear handle guard.

Whenever you need to remove or work with trees, you can’t think of doing it without a chainsaw. This tool can remove or shorten trees easily within a short time without so much physical effort.

In short, chainsaw has become the most essential tool for wood carving. But do you know, the chainsaw wasn’t made to cut woods!?

You may wonder what was the purpose then? What else it can do without dealing with woods?

I’ve done some research about the chainsaw and its history and now I’m sharing that information with you.

You may not believe that chainsaws were used to serve medical purposes in their early life. Yes, the earliest resources I’ve found shows that around 1830 orthopedics became specialized with a new instrument- osteotome, invented by Bernard Hein (source: Canadian Medical Association Journal by Wolf Seufert). From the contemporary inventory of surgical tools illustrates that this master of prosthetics had invented the chainsaw.

How Chainsaw Invented: The very first hand saw had a chain and tooth connected with one side which ran between the two handles of the saw. The user needs to replace it’s one handle with the arched needle then pass the needle through the patient’s soft tissue and replace the handle.

Then in 1830, German doctor Bernard Heine develop and expanded the saw design which is closely resembled with today's modern chain saw. In this design, he closed that serrated chain- loop & developed a better hand cracked bone saw. This version took the world to another century that creates the chainsaw as we see today.

Most of us believe that osteotome was the first chain saw. With this tool, orthopedics became specialized in their field.

Another claim we found which claims Muir, the California inventor first combined the chain with a blade for logging purpose. But his machine weighed more than a hundred pounds and it needed a crane and a bunch of people to operate. So it was not a successful invention.

On the other hand, many manufacturers claim that they invented the first chainsaw. But most of these claim are pointed to earlier or later 1920s where 1830 osteotome predates all of them.

First gas powered chainsaw was first presented in 1926. It was watercolored, operated with two cylinders and a marine type bent motor was featured from its normal position. It took 4.5 minutes to saw through ten-foot log.

Andreas Stihl, the German engineer and the father of modern chainsaw, invented the first electric chainsaw in this year. For electric power, it was known as Cutoff Chainsaw. This year, a machine was accepted as a real chainsaw and known as the fully mobile chain saw.

Modern chainsaws are gas powered mobile equipment which runs on smaller engines than before. And the inventor of the modern chainsaw is Joseph Buford Cox, he was an expert chainsaw operator.

You may think after evolving from osteotome, gas-powered chainsaw and electric chainsaw what will be the future of chainsaw!

Fact is chain saws haven’t changed much in the last few decades. They have rarely any massive, exciting or innovative changes.

But in recent days, two engineers of STIHL, Matt Santjer & Ander Prager developed a professional chain saw that is powered with the same turbine of a jet engine.

According to their design, this chainsaw is fully functional with zero vibration, has automatic start and a great ratio of weight to power. 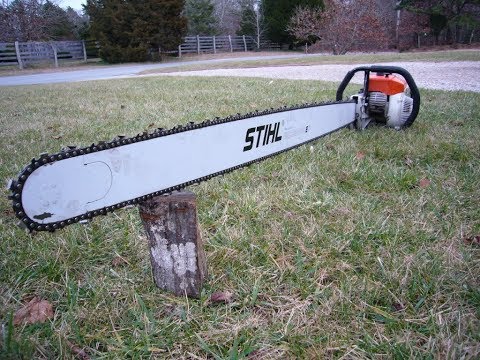 So this is the short history of the modern chainsaw. The purpose of use, design and features have changed from the first one.

Though it hasn’t got any mentionable changes for a long time, it can be changed whenever needed with the help of modern technology.

This is the tool every woodworker love to work with while carving. So it must adopt new features when a mass number of user needed.

Till then the present version can serve well our purpose.

Was this article helpful?

Let us know if you liked the post. That’s the only way we can improve.

Hey! I’m Jack Aaron. Wood carving is my passion so I’ve chosen this as my profession. I have been carving wood from my childhood with various tools but a chainsaw is my most favorite.
Now the goal of my life is to share my experience about wood carving with the chainsaw and other tools. So that interested ones can a right guideline.

How to Protect Yourself?

Get accurate information from CDC (Centers for Disease Control and Prevention) website.

chainsawcarvinghistory.com is a participant in the Amazon Services LLC Associates Program, an affiliate advertising program designed to provide a means for sites to earn advertising fees by advertising and linking to Amazon.com. Amazon and the Amazon logo are trademarks of Amazon.com, Inc, or its affiliates.